So something I think about a lot is the ongoing war between tucked and untucked shirts. Ultimately, it’s going to change from day to day-look to look, but I do have a few thoughts regarding it.

I used to think that only old men and hipster girls were to tuck in anything besides a dress shirt. I can just shudder at the thought of older dudes tucking in their Carhart work shirts into old and tattered light wash denim with a braided leather belt. Nothing against them-it to me just doesn’t make sense. On the flip side, all I could envision was my hipster girlfriends from high school who would tuck some obscene graphic tshirt into floral cut off shorts (again, nothing against them, just not a big fan). But surely there is a tasteful way to tuck without looking tacky or wearing a suit.

Point being, that as my style sense has expanded, I started to see the tucked shirt as a really good way to add a touch of refinement to even the most urban looks. The secret is in the styling…have I added some cool jewelry or played with the layering? What about shoes? To avoid looking cliche, it’s important to think these things through.

So for the untucked shirt, you get the adverse effect. When I’m working my day job, I’m supposed to “dress up” but the reality sets in that this is still Nebraska. Even selling upscale resort wear doesn’t require a tuxedo…so I often break up my suit and tie swag with an untucked or half tucked shirt. Nothing screams urban chic like a half tucked tuxedo shirt with destroyed dark skinny’s and pointy loafers!

What I’m trying to say is that, tucking or untucking a shirt (whether its a dress shirt or not) can do SO much to dress up or down a look! Experiment accordingly! Here are two examples of outfits I’ve worn in the past week that involve tucking! What do you think? 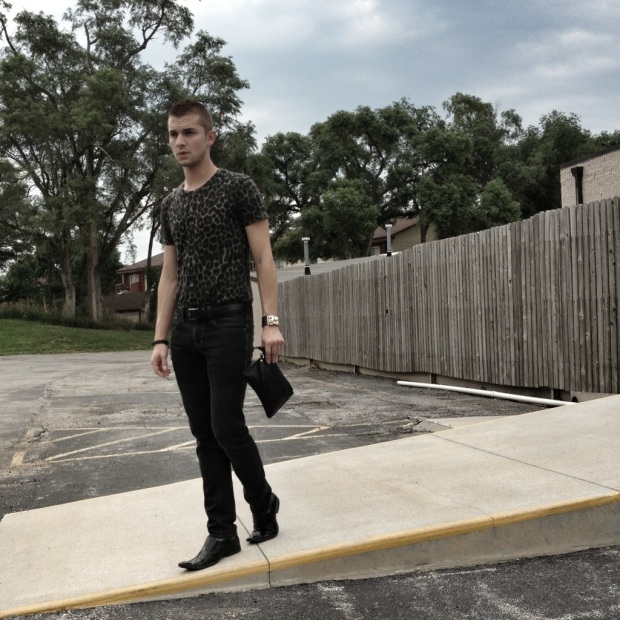 One thought on “Tuck Everlasting.”